The initial planned phases of work were completed on time with overnight work at Winn Road junction with The Avenue see images below. However The Avenue is set to undergo further improvements to enhance walking and cycling provision and support safer, more sustainable journeys in the local area. The plans include segregating the current cycle lanes along The Avenue between Winn Road and the subway underpass on The Common, linking into possible ‘quietways’ enabling cyclists to travel on parallel routes.

These additional works are planned to start from Monday 6 September for approximately 4 weeks and will be delivered over several phases as follows:

Phase 1b: Monday 6 September for up to two weeks: This is to repair and replace the drain covers and install two new dropped crossings on The Avenue between Winn Road and the bus stops just north of Highfield Road. Work will be carried out under lane narrowing with two-way traffic maintained.

Phase 3b: Overnight from Monday 27 September for up to one week: This is to install the cycle lane segregation Northbound between The Common underpass and Winn Road. During this closure we will undertake other works including applying an anti-skid surfacing at the new crossing and coloured surfacing for parts of the cycle lanes. This work will require the overnight closure of The Avenue between Northlands Road and Burgess Road with a signed diversion via Hill Lane.

Highfield Road dropped crossings, was postponed from the original programme of work, following a temporary loss of crew due to covid in early August but will be completed during these phases but over several Saturdays. As before works will be completed with access maintained through give and take. The works were undertaken from Monday 21 June for 10 weeks and were delivered over these phases:

Phase 1: 21 June for up to 7 weeks – Installation of a new toucan crossing on The Avenue, junction improvements at Winn Road and continuous crossings at The Cowherds entrances
These works saw the construction of a new toucan crossing between Winn Road and The Common. There were changes to the Winn Road junction mouth and installation of continuous footways across Winn Road junction and The Cowherds’ access roads to give pedestrians and cyclists priority over vehicles.

Phase 2: 21 June for up to 10 weeks – Tree management and street lighting improvements From Highfield Avenue to Winn Road
This was to cut back overhanging trees and to carry out street lighting upgrades.

Phase 3: 9 August for up to 3 weeks – Westwood Road junction with The Avenue improvements
These works were to modify the junction mouth and install a continuous footway crossing to give pedestrians and cyclists priority over vehicles.

Phase 4: 9 August for up to 1 week – Highfield Road at the junction with the Avenue.
This is to install a tactile dropped crossing for pedestrians crossing Highfield Road. These works were delayed due to covid impacting front line crew.

Separate to this the remaining trial cycle lanes along The Avenue and Bassett Avenue are to be removed. Details about the cycle lane removal can be found here.

We will be returning to apply an anti-skid surfacing to either side of the new Toucan Crossing on The Avenue in the Autumn; we will publicise this closer to the time. 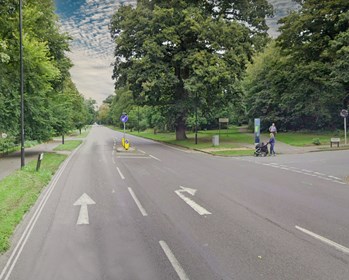