The scheme was installed as a temporary 1.5m wide mandatory cycle lane in each direction from south of Chilworth Roundabout to Winn Road.

The speed limit on both Bassett Avenue and The Avenue was reduced from 40mph to 30mph.

To enable the cycle lane to be installed and to maintain capacity of The Avenue, the right turn from The Avenue northbound into Burgess Road has been banned. Traffic requiring this manoeuvre will need to U-turn at the Winchester Road roundabout. Other temporary barriers on Burgess Road and Winchester Road have been removed to manage traffic capacity on these approaches.

The trial scheme for Bassett Avenue-The Avenue was implemented in May to create a continuous link for people who are cycling and walking along this corridor. This created a continuous cycle route for people who want to cycle to work or for leisure between Southampton and Chandler’s Ford and Eastleigh. It connected the newly completed sections of cycle route on SCN5 along Inner Avenue to the south and Hut Hill north of Chilworth, implemented as part of the joint Southampton & Hampshire Transforming Cities programme (TCF). TCF is a bold and ambitious programme that will see changes to The Avenue and Bassett Avenue to help cycles, buses and people walking. There will be an opportunity to consult more widely on this as plans continue to be developed.

The Bassett Avenue scheme complemented the other pop-up measures on Hill Lane and Portswood Road, enabling people to cycle with ease to work, school and for leisure.

It has been a positive trial and, during the period the scheme has been in operation, we have closely monitored the changes and how they have performed by gathering lots of data and people’s feedback. We have looked at traffic flows, cycle usage, vehicle and bus journey times and speeds. During the Summer there was a change in traffic behaviour and, as Covid-19 restrictions were eased, traffic increased and some journey times along the corridor increased to above pre-Covid-19 levels – particularly from Winchester Road.

Early on we received feedback on the queues approaching the roundabout on Winchester Road. Initially this was reduced to one lane for safety. The cones were removed and the two-lane approach re-instated with left hand lane for Bassett Avenue north and right hand for Bassett Avenue south. This helped to reduce the delays on this approach.

We have continued to liaise with schools and the University to fully understand their current and continuous plans relating to the pandemic. It is important to facilitate cycling in this area to encourage students and staff to access the schools and colleges by bike or foot. We have also liaised closely with the bus operators about the impacts on their services as the demand for bus services changes.

It is unlikely that large events in the Common, such as Parkrun, or elsewhere in the City will take place in the foreseeable future. We will continually monitor the situation and change / amend the scheme should this be required to manage large events in the area as and when these are confirmed.

In early September, the temporary cycle lanes on Bassett Avenue between Winchester Road roundabout and Chilworth Roundabout were removed following an increase in traffic and journey times. This is covered in more detail under point 4 of these FAQs.

The temporary cycle lane was implemented on 29 May. The changes in travel behaviours, along with the return of schools in September, mean that this is the right time to adjust the scheme.

On 2 & 3 September we made the following changes to the scheme:

TOvernight works took place on Bassett Avenue on 2 & 3 September. This scheme is still a trial scheme and we will be continually reviewing it over the coming months.

What about disruption during the construction?

Work on The Avenue and Bassett Avenue was carried out overnight to reduce the impact to the road network. A road closure between Winchester Road and Chilworth Roundabout was in place to ensure the work could be delivered safely.

What monitoring will you put in place to ensure that social distancing is respected and that different travel modes are counted?

Will road users be able to pull in and give way for emergency vehicles?

I hope that any measures you do implement will make better use of the Common. It would be much more pleasant to walk and cycle along the Common, rather than alongside these busy roads, so perhaps you could ensure better provision parallel to The Avenue.

In February this year, the council undertook an extensive consultation exercise on proposals to improve leisure cycling routes on Southampton Common as part of improvements to Lover’s Walk. The consultation achieved 283 customer responses with the majority agreeing with the council's commitment to its Green City Charter to encourage sustainable travel and improve air quality in the city. The council is now progressing this scheme of work. It is considered though that the two schemes will complement each other.

Social distancing is very difficult on Burgess Road (if you walk from Hill Lane to The Avenue, the pavement is non-existent on one side and is very narrow on the other). What do you propose to do there?

Unfortunately we are unable to provide a path on this section of Burgess Road due to the issue of land ownership and the fact that it is Common land rather than highway land.

We have used temporary or experimental traffic regulation orders to implement measures swiftly. These types of orders allow councils to install highway changes and monitor their impact before making decisions on whether to make them permanent. This is different to the direct implementation of permanent changes which, due to the legal consultation process, can take months to bring about.

We will be closely monitoring the impact of the changes and collecting customer feedback and these will form part of any future discussions on whether the changes are removed or made permanent.

The Bassett Avenue-The Avenue scheme is a trial scheme. Parts are being implemented under a Temporary Traffic Regulation Order (TTRO) as well under the Council’s powers to manage the public highway. This approach has enabled the Council to move quickly in line with Government guidance to install the scheme, monitor, evaluate and take feedback from residents, businesses and users. There is constant monitoring of the impact of the scheme and further adjustments can be made.

After this initial trial period we can then make a decision on whether to make the trial scheme permanent, make alterations to the scheme or remove the scheme completely. If a scheme is made permanent, there will be a full consultation process to capture a variety of views. This will inform any final decision on the scheme.

This process enables us to support active travel and implement schemes that facilitate safe and socially distanced active travel quickly as instructed by the Government.

We will regularly review the scheme, and the scheme or parts of it can be amended at any time during the six months. The three-month review has meant that the section between Winchester Road and Chilworth Roundabout will be removed. 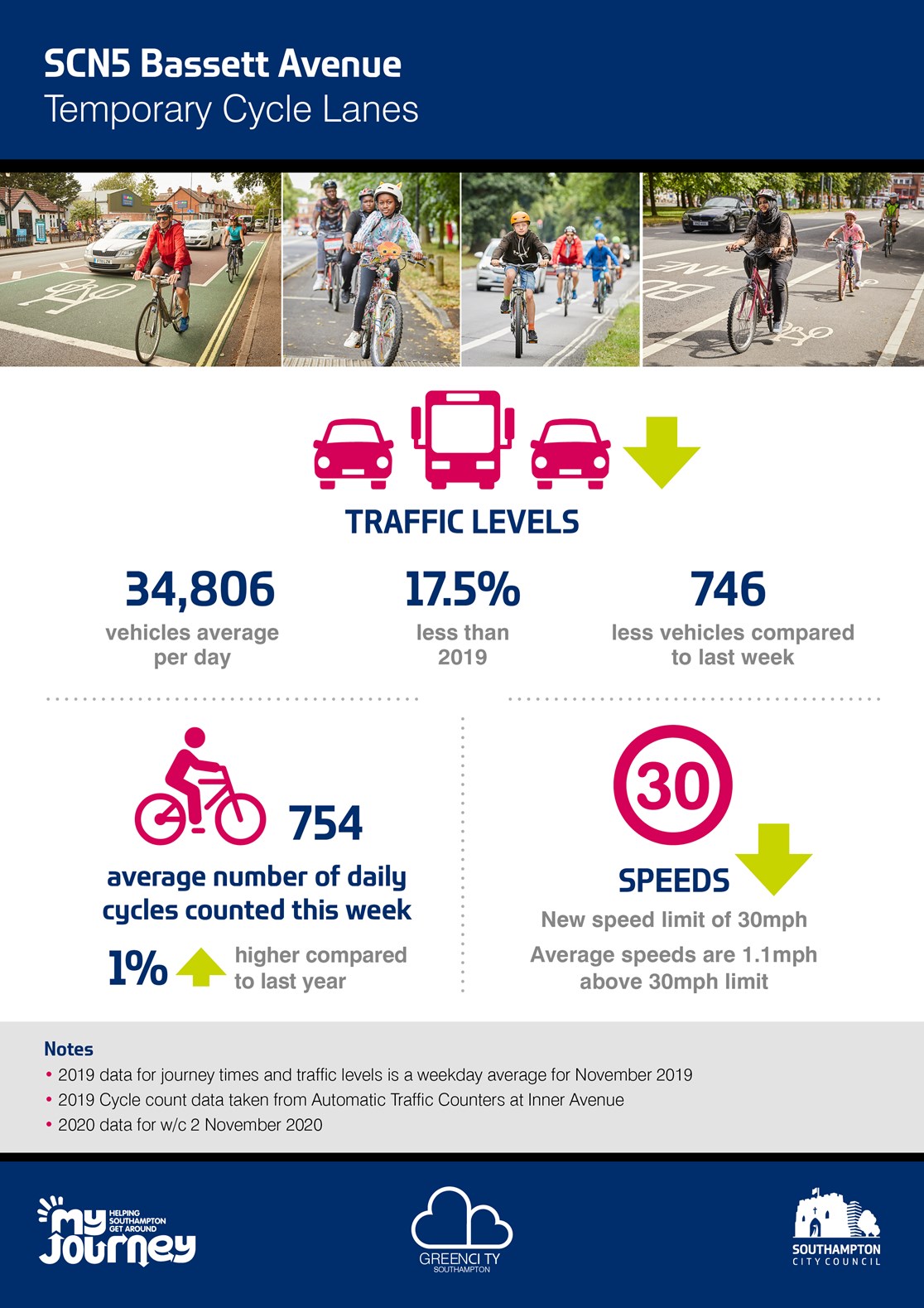