Why is this work being carried out?

Why are we doing the works now?

We have been working closely with the port, other highways agencies and businesses in the area to co-ordinate these vital works.

The work will start immediately after the boat show in September and the closure of the M27 for the Romsey Road replacement scheme by Highways England on the weekend of the 28 to 30 September.

January to March is a quieter time for the port and the only time when it would be possible to close access into Dock Gate 20 for this phase of the works.

Why is it taking so long?

Millbrook Roundabout is the main route into the western docks via Dock Gate 20 so to minimise the impact, the work has been divided into four separate phases. The scale of the work required is substantial and involves the complete removal and rebuilding of the roundabout’s foundations down to over a metre in depth. In addition, First Avenue, up to the entrance to City Depot is also being fully reconstructed.

What travel advice is available for getting into the city?

It is anticipated that at peak times the area around Millbrook Roundabout and the western approach into the city centre are likely to be extremely busy with diverted traffic. We are encouraging drivers to plan their journeys and allow extra time. The peak journey times are between 7:30am-9:30am inbound and 4:30pm-6pm outbound.

It is recommended that drivers coming in to the city via the motorway network consider using an alternative motorway junction other than the M27 junction 3.

If you think your journey is going to be affected, you might want to consider alternative transport and the My Journey team have provided some travel advice. We are asking local employers to consider flexible working to support affected staff if possible.

Will Millbrook flyover be open?

Yes. While the area will be busier than normal, Millbrook Flyover will be open in both directions, into and out of the city for the duration of the works.

How will this affect bus travel?

Pedestrian and cyclist using Second Avenue are being diverted via First Avenue in this phase due to the extent of the works (see map). Where First Avenue is now one way for vehicles a temporarily contraflow cycle lane eastbound has been provided so cyclists can follow a similar diversion route to pedestrians. 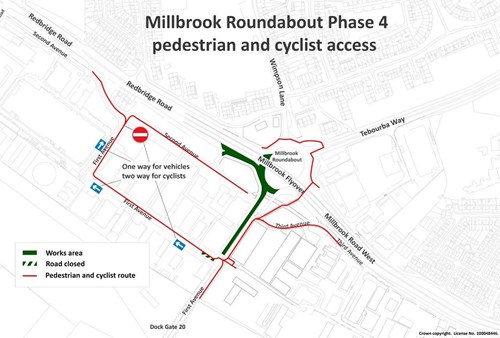 Pedestrian and cyclist access from the north side of the roundabout will be possible via the east side underpass.

Pedestrian and cyclist access will not be possible across the southern side of the roundabout onto Second Avenue, as the footway alongside of phase four works is being excavated to install replacement kerbs.

Why can't the road be kept open during the day and the work carried out at night?

It is not possible to open the road between shifts during a large scale excavation that is over a metre deep.

Why can't one lane of the roundabout be kept open?

Due to the depth of construction it would not be safe to keep one lane open and allow traffic to drive next to the excavation area.

Why isn't work carried out 24 hours a day seven days a week to speed up the work?

There will be crews working from 6am to 6pm seven days a week. Although some of the preparation works were carried out overnight, working overnight for long periods is not efficient or effective. Low light, low temperatures, limited access to resources and suppliers (who operate during the day) and the logistics of removing large volumes of material at night would be slower and more costly. It is also unacceptable to subject local residents to prolonged noisy overnight work.

Who is funding this work?

Southampton City Council secured £5m of funding following a successful bid in 2017 to the Department for Transport Maintenance Challenge Fund. The council is contributing a further £3.3m to meet the total cost of the £8.3m scheme.

How do I access the Household Waste and Recycling Centre and any of the local businesses affected by the closure?

All businesses and the Household Waste Recycling Centre will be open for business as usual. During phases one, two and four it is still possible to use the roundabout to drive onto First Avenue, depending on the phase follow the diversion routes to get to this part of the roundabout. During phase three (from the start of January until March 2019), the diversion is via Allington Road and Second Avenue. Follow diversion routes to exit.

We have also updated all major satnav providers, so if you have a satnav app that has live traffic updates it should automatically get you to the recycling centre. Use postcode SO15 0LJ.

Wasn't Millbrook Roundabout resurfaced a couple of years ago?

Yes, the north west third of the roundabout was resurfaced down to 110mm in 2016 because it had become dangerous. Unfortunately due to the unstable foundations that surface is already breaking up.

Will the diversion routes get priority at traffic sign?

Yes, we have adjusted traffic signal timing to allow for the increased traffic using these routes. There is still going to be congestion at peak times because there has to be a balance to ensure other routes are not adversely affected.

Can vehicles U-turn at the Regents Park junction instead of using the diversion route?

This was considered but when modelling what would happen we saw journey times for everyone travelling in and out of the city from the west increase dramatically. This is because there is only a single lane to turn around at Regents Park and it requires stopping all three lanes of traffic leaving the city.

This limits the amount of green time that can be given without impacting outbound traffic so this option cannot accommodate all of the diverted traffic and the excess of vehicles wanting to do this turn would then queue back in the right hand lane, restricting Millbrook Road West and Redbridge Road down to one lane.

The combination of the extra diverted traffic and restricted lanes would result in very long delays, far greater than the time to follow the diversion route, and it would affect everyone coming into the city from the west. As a result the U-turn at Regents Park junction is being suspended to prevent this happening and we will be monitoring the junction to see if further measures are required.

How do I ask questions or find out more?