Details of the scheme

The scheme included a temporary 3-metre wide mandatory bus lane in each direction from Lances Hill to Northam River Bridge achieved through the reallocation of road space. The temporary bus lanes, which are also accessible for taxis and cyclists, were implemented on 24 June 2020, with the inbound section of the scheme over Northam Bridge implemented thereafter following works undertaken in connection with the cycle and bus access improvements along Northam Road.

Why is the scheme being removed?

The council has been monitoring traffic conditions along the corridor by measuring motor vehicle journey times between Six Dials and Maybray King Way as timing points. The journey times (taken as an average over the period), during the period that the temporary bus lanes have been in place, are as follows:

The above table shows that for the eastbound (out of city) PM Peak, journey times are running approximately 5 minutes more than in pre Covid-19 conditions.

The below graph shows average weekday traffic flows and journey times for vehicles travelling along Bitterne Road West following the installation of temporary bus lanes in June 2020. The graph covers the period from July 2020 to May 2021, against a pre COVID-19 baseline (July 2019). Average journey times are for vehicles travelling between Six Dials and Maybray King Way.

The data was captured through our network of Bluetooth sensors and a permanent Automatic Traffic Counter. 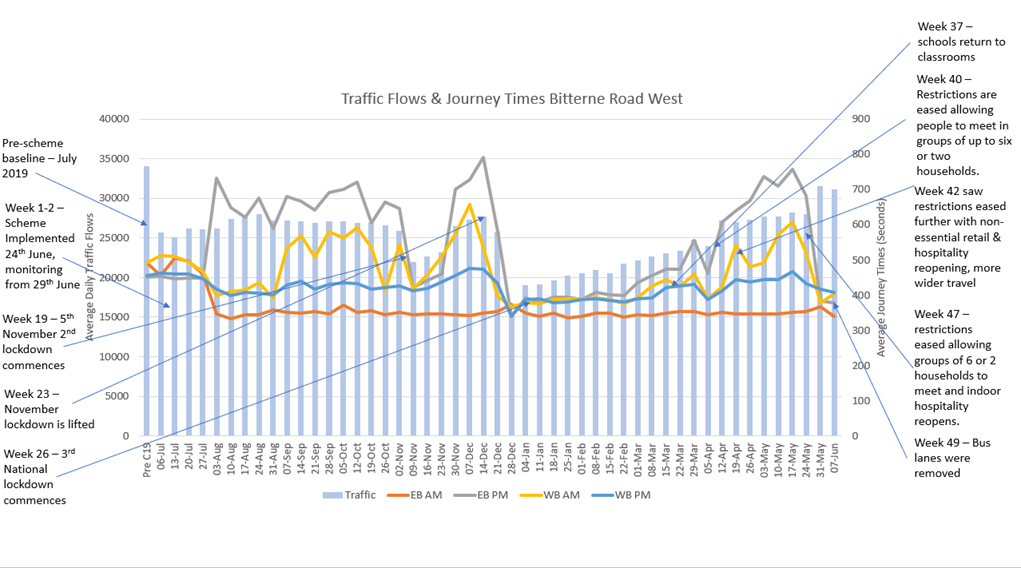 In addition, with the government announcing the roadmap out of the current lockdown and the relaxing of social distancing requirements for public transport, the need for the bus lanes to mitigate the impact of the pandemic on the transport network has reduced. The council has therefore taken the decision to suspend the bus lanes.

Our full report outlining data for the scheme and responses to the Experimental Traffic Regulation consultation is available here.

How have you monitored the scheme?

Automatic Traffic Counters installed at Northam Bridge and Maybray King Way allow us to monitor daily traffic flows and average vehicle speeds. This is supported by regular on-site observations, undertaken by Officers and volunteers, and a weekly review of journey time data collected through our network of Bluetooth sensors and Real Time Information for bus services.

Analysis of these datasets is monitored against pre-lockdown and lockdown pre-scheme baselines and key thresholds, including lane capacity, which when met will trigger alterations to the scheme or its partial or full removal.

The Bitterne Road West scheme is a trial scheme supported by the implementation of restrictions under an Experimental Traffic Regulation Order (ETRO).

ETROs allow schemes to be introduced on a temporary basis in order to assess their impact and effectiveness before a decision is taken on whether or not they are made permanent. This approach has enabled the Council to move quickly to support active travel and implement schemes that facilitate safe active travel quickly.

As of Tuesday 31st May, we will be suspending the ETRO for the temporary bus lanes on Bitterne Road West between Union Road and Maybray King Way. Signage will be installed overnight on this date advising of the suspension and directing traffic to use both eastbound and westbound lanes between Union Road and Maybray King Way. The previous bus lane between Princes Street and Britannia Road and at the Six Dials junction will remain as bus lanes and will not be part of the removal.

The second phase of works to reline the carriageway will be carried out overnight from Monday 21 June for up to five nights. 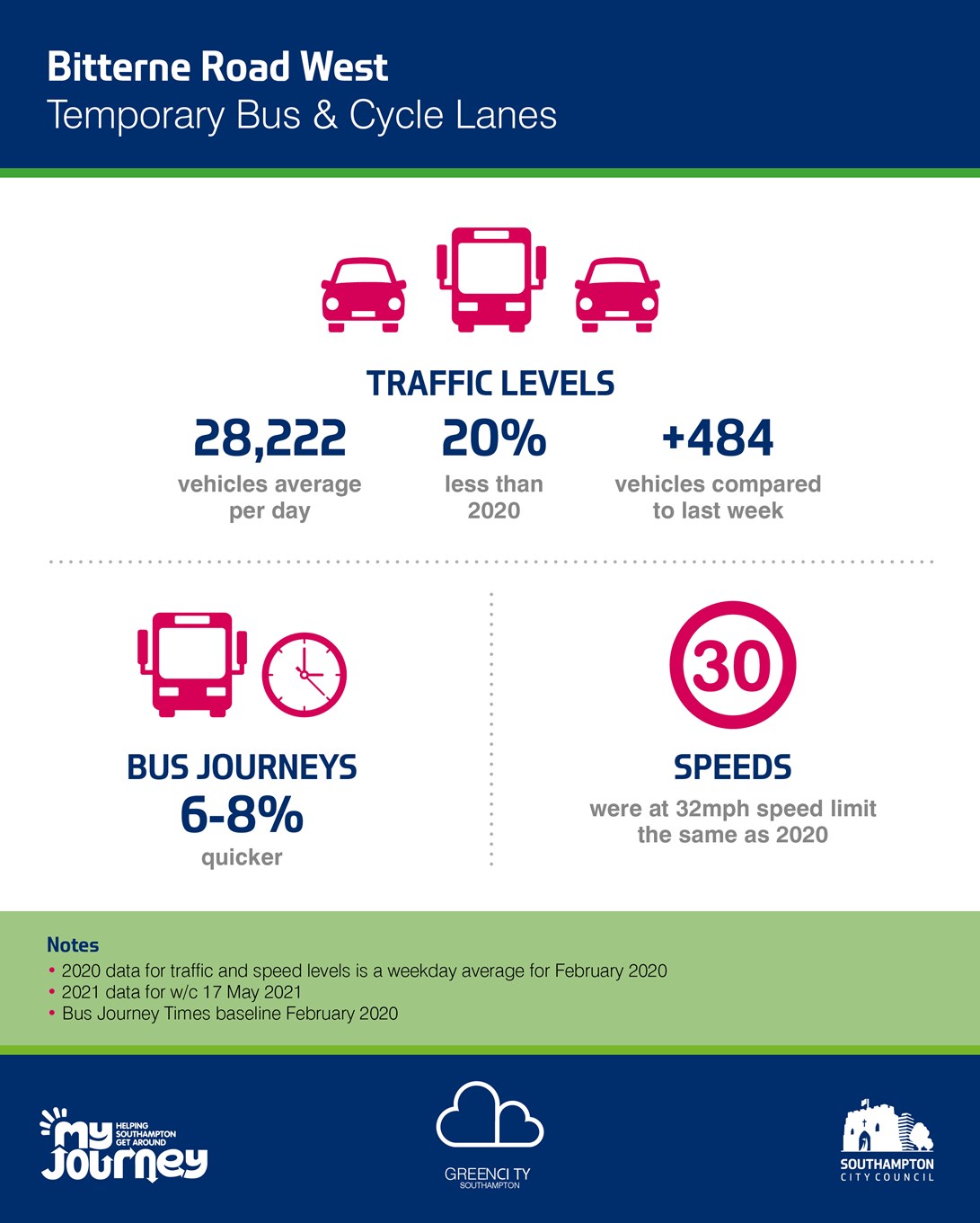